Twentysomething women have turned the boss into an icon, the ultimate position to have dreams and then make them happen. But in doing so, are they selling themselves short? 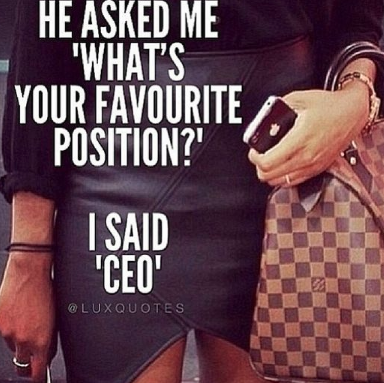 By: Rachel Hills, The Daily Beast

08.28.14 4:45 AM ET
Alex Hayden Hernandez decided she wanted to be an entrepreneur when she was 14 years old, after she stumbled on a girl her age on MySpace who had made more than $1 million running an online business. “I remember sitting at my computer thinking, oh my god,” she recalls. “She had bought her parents a house.”
From that moment on, Hernandez never considered getting a conventional job. When she graduated from high school, she made her money selling candles online. Then she tried being a health coach, and, after that, a social media consultant. Today, Hernandez’s business is business itself.
Hernandez, 22, is the creator of #bossbabe, a made-for-social-media meme turned online community promoting entrepreneurship to millennial women. Since launching less than three months ago, the project has amassed more than 16,000 followers on Instagram, most of them women aged in their late teens and early 20s. Followers are treated to daily motivational quotes such as “I love the smell of fresh ambition in the morning” and “Don’t ask yourself ‘Why you?’ Ask yourself, ‘Why the f*ck not you?’”, superimposed over images of pop cultural figures such as Beyonce, Nikki Minaj, and Rihanna.

Being a #bossbabe, says Hernandez, is all about attitude. “It’s not a status, it’s not a network. It’s a mentality,” she explains. “A #bossbabe is the girl in the room who has the biggest dream, and the minute she voices it, everyone laughs and thinks she’s crazy. But what makes her a #bossbabe is that she stands by her dreams.

She is a girl who sticks [to] her goals.” The #bossbabe is the counterpoint to another female figure who currently looms large in both the popular vernacular and Hernandez’s Instagram account: the basic, whom Hernandez describes as a girl “who has been so scarred by society that she has no dreams of her own.”
If the #bossbabe sounds familiar, that’s because she is. On Kickstarter, Brooklyn filmmaker Erin Bagwell is raising funds for Dream, Girl, a documentary about female founders and entrepreneurs, which has been featured on Fox Business and Elle.com. Then there’s Nasty Gal CEO Sophia Amoruso, whose best-selling memoir-slash-advice book #GIRLBOSS is a forerunner to the #bossbabe in everything from its pale pink design to its hashtag title. Last week, Amoruso announced the launch of her new #GIRLBOSS Foundation, which will award financial grants to women in the worlds of design, fashion, music, and the arts.

Collectively, these young women are making entrepreneurship not just aspirational, but a little bit edgy. While Facebook COO and Lean In guru Sheryl Sandberg urged teachers to “ban bossy,” they embrace the label “boss” wholeheartedly. Nor does the #bossbabe suffer from any “confidence gap.” To the contrary—she is legitimately fierce. “It’s okay. Be humble. Because they already know you’re the sh*t,” reads one pithy quote on Hernandez’s Instagram.

The #bossbabe is a feminist in the sense that she believes men and women should be equal, but she is not interested in talking gender politics. “I believe the best way to honor the past and future of women’s rights is by getting shit done,” Amoruso writes in #GIRLBOSS. But more than feminism, what she embraces is entrepreneurship as a path to individual self-fulfillment; a means through which young women can exercise agency and make their mark on the world. And if you happen to make a quarter of a billion dollars along the way—as Amoruso has—all the better.
“I like the risk-and-reward factor of entrepreneurship,” Bagwell, 27, explains. “I like being in charge and it’s not something I feel is a bad thing. I love being surrounded by one hundred different things going on. It’s really fun, and it gives me a lot of energy.”
This push toward entrepreneurship is not surprising, says writer Kathleen Geier, who is co-organizing a conference on women’s work issues for political magazine The Baffler on September 13. “The economic downturn has diminished economic opportunities for everyone, especially twentysomethings. So this idea of starting your own business, and being your own boss, must sound very appealing. If there aren’t any real jobs available, it’s understandable that people would want to create their own.”

For most people who were born after 1980, there has never been such a thing as a “job for life.” Children of Reagan and Thatcher, we came of age in an era of chronic instability, where the most exciting opportunities available to us were often the ones that we created ourselves. According to the Freelancers Union, nearly one in three working Americans is now self-employed. For those born after 1990, the contrast is even starker—it’s not just a matter of no stable jobs, but in many cases, of no jobs period.
But the upsurge in entrepreneurship isn’t just a reflection of what millennial women are pushed to do. It is also a reflection of what they are pulled to do. And the flipside of neoliberalism’s freefall is the sense that anything is possible. That if you just grab hold of the right ropes and have the strength and strategic know-how to leverage yourself upwards, you will be rewarded with limitless opportunities.
This may sound like a fantasy—and in many ways, it is—but thanks to social media, it is one that it is increasingly grounded in reality. “I feel like we are now living in a time where whatever your gifts are, whatever your passion is, you can take your gift and give it and make a living off it and monetize that,” says Hernandez.
And that’s not only true for outliers like Facebook founder Mark Zuckerberg or teen prodigy Tavi Gevinson. It was on the Internet that Amoruso turned her love of vintage clothing into a successful business. It was on the Internet that Hernandez launched each of her businesses. And it is the Internet that is allowing Bagwell to independently produce her documentary, without the backing of investors or a studio.
Despite this—and despite the proliferation of self-directed women in popular culture at this moment—there is still a sense among young women that being powerful means presenting yourself in a particular way. Hernandez wasn’t just inspired to create #bossbabe because she loved business, but also because she felt a conflict between her entrepreneurial aspirations and the way she wanted to present herself. “I like long nails and big hoop earrings,” she says. “I love to wear big hair and weaves. I have this type of fashion sense that clashes with what we think of when we think of a businesswoman.” The tagline for Bagwell’s Dream, Girl, meanwhile, is “redefining what it means to be a boss.”
In part, that process of redefinition is a matter of popularizing images of the boss as a woman, says Bagwell, who gained much of her early entrepreneurial education through reading books by business leaders such as Steve Jobs and Tony Hsieh from Zappos. But it is also a question of altering what a female boss is permitted to look like, and challenging the muted professionalism of Baby Boomer and Gen X leaders like Hillary Clinton and Sheryl Sandberg.

0 comments on “Why You Should Thrive To Be A #GirlBoss”

I want to hear your thoughts! xoxo Cancel reply